Here's another COVID song. Sing with me...

I finally got a take on this I like and it's only the one track, but I welcome any submissions to add to it. Just record any way you can and send me the file any way you connect with me. Harmonies? Sax? I don't know, but here it is:

STAY AWAY
Sing with me my friend! 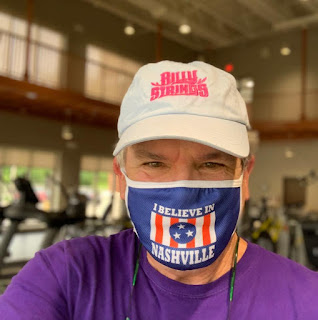 I made this up on a dog walk

and recorded it on my iPhone Voice Memo app. Cleaned it up a little with Garage Band. I'm working on some songs for a COVID-19 album. I know. That's crazy. Listen to this, an Irish pub song:

Whistle while you listen. Even better, record your whistling in any kind of .mp3 track and I'll mix it in. Or sing along to it and record that. Be good to have a dozen or so out of tune but enthusiastic voices.
at July 07, 2020 No comments:

Everybody everybody! I am beginning to work on transferring a tidy little novella written in 1983 to digital format and will be rewriting as I do so. It is about a runner in Los Gatos, California  who suffers from hallucinations (but are they hallucinations?) and was originally titled "In the Running," but that title may change. Stay tooned.
I have been using Microsoft Lens' Optical Character Recognition to edit and republish short stories here, but for this piece I will be retyping from a typewritten copy. It's 136 double spaced pages with 26 short chapters so, well, that'll take a while. With Lens, I have anywhere from a dozen to fifty failed character conversions to correct on each page, sometimes with funny results, I do recommend it for shorter jobs. I don't think I will publish this one piecemeal but I may change my mind on that.
In the meantime here is something off the fictional beaten path. I put together a Pinterest board with all of my articles having to do with West Nashville, published in the periodical 372WN. By way of giving credit and linking to the publisher, I added a pin to the archival website to the board.
First published in December of 2016, it was the brainchild of Nashvillian Miriam Drennan, a super smart human being and a powerhouse of publishing. Volume III, issue 5 was the final issue published, in August 2019. For anyone interested in West Nashville today or yesterday, I can't recommend it highly enough. Do go to the archive site: It's a little treasure box of fascinating reading. Here you are. You are welcome. Just click on the screen grab below.

Tides of the Heart

Tides of the Heart

I awoke this morning with my honey snuggling naked beside me. It's her one Saturday to work, this month of May. I work every Saturday. She's a sales rep for a large, hi—tech, employee-friendly flower importing company. I manage a bar for an exclusive yacht and tennis club condominium community which is in its sort of preadolescent stage right now——it's bursting with energy and potential. I like the work okay, but I also love to leave it behind.

On a morning like this, I wish I could leave it behind forever.

The sand between the wild, crashing surf and the man—made dune is damp today from the predawn rain. High tide began to recede only an hour ago so the ocean hasn't had its chance to leave behind any of the good-sized rocks and corals and shells that can often be found here along the line where the sea allows the earth to feel breeze.

The water is almost warm now that my bare feet have grown accustomed to it. The constant landward breeze washes me pleasantly.

I drove the half mile from our little condo apartment to the public parking lot right about the time the night was giving itself up to the day, and I had intended to park there in my usual spot at the northernmost end of the big gravel lot. But the parking attendant was already there and open for business at $2.00 a car; and since I have to be at work in two and a half hours I made a u-turn and pulled on down to the very south edge of the public beach, parking off the side of the road on the wide shoulder, just in between the "NO PARKING" signs. No other cars were there, but later today the street will be lined with all manner of illegally parked vehicles.

The cops never tow from here.

I had taken not twenty steps along the edge of the sea before coming upon a beautiful blue rope, maybe twelve feet long and nearly three inches in diameter, tightly braided from eight half—inch acrylic strands. A giant‘s blue bracelet. It's bright, bright blue; with brown bulb seaweed and tiny mollusks, white, edged with dark umber--all intertwined amidst its own braiding. The ends are both frayed a foot and a half up them, giant, natural paintbrush bristles with unruly toes.

Even though it must have twenty or thirty pounds of sand and seaweed inside its braids, I might take it home. I could wash a lot of the sand out.

I’ve walked as far north as I care to, past the northern edge of Haulover Beach, well up into the private beaches. A couple is huddled on lounge chairs maybe a city block north of me, and I do not want to step into their private space.

I turn. I take this moment to notice the world.

Out to the south there's bright blue above and beyond  ominous gray thunderheads and a black bottomed, high topped layer of cumulonimbus clouds. The sky to the north is bruised a deep gray blue. There's a tentative dark funnel spiraling down the underbelly of the northeast edge of that band of gray, out scores of miles from the Sunny Isles fishing pier. It will probably amount to nothing, but the skipper of that tiny fishing boat that appears to be in its range, but may not be, might be thinking otherwise.

The color of the ocean is a deep, chalky, pastel gray green. There's white foam along the tops of the waves. Further off to the northeast is a broad, dense, massive rainstorm. On the right—hand edge, the southern edge of it, about ten degrees above the horizon the sun peeks through, shooting out rays to the south and fanning out bands of light below the bank of gray clouds.

It's like a visual representation of a blast of trumpets. A fanfare. A flourish.

I turn and retrace my steps.

And yes, I stop to extricate this wonderful piece of rope from its wet sand setting.

As I pull its heavy wet weight behind me, I feel I'm painting in the sand. I must look a fool.

Taking inventory. I found a small white sailor's cap with dark green bunting; but the button on the top was rusted and it was torn and filthy, so I left it.

I found a collectible piece of lumber. It's about a foot and a half wide and three feet long, irregular but smooth. I '11 take it home and maybe paint upon it.

I found two respectable pieces of coral, one of which had been deposited by the ocean in the sand upwards of the surf but the other propped up like a mask, or like the sculpture of a face in the sand, 'way up, twenty or thirty feet away from the ocean's daily grasp. It was put there, I know it: someone with an appreciation for irony and drama had placed it on display, maybe on a moonlit walk last night, maybe in the predawn morning. Now that the piece is mine I'11 take it home and give it an important role as part of a pile of coral and shells that I 'm slowly but surely constructing on the balcony of our little apartment. Someday--  maybe soon, maybe not so soon—-but someday, when we move back to Tennessee I'11 carefully pack each piece of coral and stone and I'll take them all home and I'll actually build a little wall, to conjure the ocean.

It might be an illusion but the salty air smells fresh and clean.

The fast—moving rush of it invigorates me.

I'11 miss this someday. Today I devour it.

I‘m smack—dab in between two distant but visible public fishing piers here. People must be fishing: it's Saturday morning,  but both piers are too far away for me to see individual figures.

The band of weather to the northeast appears to be growing larger, which tells me that it's on the way: it's going to rain here soon, and rain hard.

I found a two—foot long piece of sort of brand new four—by—four which I '11 take home to elevate a window box planter off the floor of our balcony.

I don't want to flog myself, or to make out like I'm not happy with my life, which I most certainly am; but sometimes I think that if I had a hair on my ass (that's a Tennessee expression, not a literal one) I would take that piece of beachcombed wood and paint a painting on it that when I sold it would pay a month's rent. Or I would take a little plaster and a little paint and create an undeniable work of art out of that mask—coral I found: That might earn a car payment if I could sell it.

If I could capture the glory of this morning in words, and if I could manage to get someone to buy that--for the magazine section of the Sunday paper, or for Reader's Digest, I don't know--the proceeds might take care of the electric bill, or pay for enough beer to see me through the approaching sweltering summer.

I was hoping there would be sunshine, and maybe a little deepening of the tan to be had today; but the air is still cool and refreshing, and the incessantly pounding of the surf deeply renews my spirit. Why does it do that to me? Is it genetic memory? My dear departed dad lived in Florida as a child. Maybe it's a response just basic to all human beings, tied forever to the coursing of human blood and the pumping of the human heart.

Ah, the tides of the heart.

I found a lot of valuable things today. For now I'm going to sit here on this old beach towel, my booty piled up beside me, and I 'm going to attend to the surf.

The ocean tells me that everything's all right. As it crashes deeply, insistently, over the mirror smooth surface of the land at its edge, it‘s all foamy white, like the head of a beer.

Here's another COVID song. Sing with me...

I finally got a take on this I like and it's only the one track, but I welcome any submissions to add to it. Just record any way you can...