Education Nation Attempts to Talk about It!

Did you miss the highly touted EducationNation broadcast on NBC yesterday?

I didn't, though I did check out before its ending. As a chat participant who did the best he could to be an active participant, it was immensely frustrating to be one of 6,000 educators  who had been given access to the live chat stream--only to discover that it was being filtered manually by a reader who was then reposting comments into CoverItLive.

I've use CIL myself some over the past couple years, and I must say I'm in awe of the chutzpah shown by this attempt. And I'd bet that I'm not alone in spending an hour of my time in a conversation that really wasn't one. 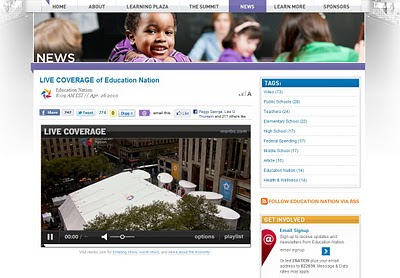 Don't get me wrong, the attempt was epic. I'm just saying that if dialog didn't move beyond trying to "fix" the current educational system into some right radical ideas for right radical restructuring, nay, re-imagining, then all the fol-de-rol was just that, and balderdash, too. Discussions about "are teachers under attack?" and arguments about teacher tenure just aren't enough.
Since I didn't get any of my comments into the live chat, I am going to pull a few onto this blog post from the Facebook page set up for an alternative outlet. To my mind, this was a far better venue for the dialog than CoverItLive, but that could be just because I felt a modicum of dialog was going on there since immediate feedback from "likes" or comments on my comments could be seen immediately. Here are the comments, then I'm taking off out of the office for home. Without sounding despairing, because I'm not, really, I plan to wake up tomorrow to try to make some change in a system that is antiquated and held in place only because it's supported by the 7 most dangerous words in the English language, "That's the way we've always done it."
(After 30 minutes of searching for my now "older comments." I give up, but I will spend some time tomorrow working through the current topics. I hope they're not as dead-end as they were when I tried to participate...
Cheers,
Scott
at September 27, 2010 No comments: Links to this post

New Research on Study Habits: We've got it all wrong.

This is a most interesting NYTimes article about new research centered around the best way(s) to study/learn. It seems the most important think (though certainly not the only important thing) is motivation, something we can almost certainly assume our Virtual Learning kids have from the get-go. Thanks to USN's Justin Karpinos for sharing it and to Lee Ann for passing it along to me!

I'd shore like one of 'em Ovation Gitt-tars. Vote for moi, please!!!