Yesterday Newschannel5's Scott Arnold came by our digs at the MNPS Virtual School, up in Suite 300 of the Cohn ALC on Nashville's Park Avenue, and he and his extremely artistic cameraman spent 45 minutes or so in a breakneck interview of our Coordinator/ActingPrincipal Barbra Thoeming. They asked excellent questions, took stellar video, and then left for a drive up to Two Rivers to interview two twin sister Full-Time students in our program. Everyone concerned did their part, but as we know that's no guarantee a good news story will air. Well, a good news story did air, and I thank Scott and his own team for so aptly portraying at least a portion of what me and my team does. If you don't blink, you'll see me heading up to my office to get back to work after facilitating a Skype interview with Alton Knight, a pioneer online teacher, on my iPad for the camera! Enjoy (if video takes too long to load try this link):

Why I Still Second Life, Well, One Reason!


I don't talk about it much here; I mainly confine virtual world discussions to my Second Life blog, "Oh! Virtual Learning!" But lately I have been becoming interested in reviving my membership in learning communities there. I know, people think I'm nuts, and there are 10 (binary) kinds of people when it comes to understanding the value of 3D virtual "sense of place at a distance," those who are inworld(s) and those who aren't. I logged into SL this early Sunday morning to visit my new little shoppe (you have to pronounce the final "e") at Guthries Folk Club, which I blogged about recently here.

I was greeted by an instant message from one of my literally hundreds of "friends" in Second Life. Although many of those friends ("friends" in the social media sense) have become real-life actual friends over the years I've spent as an educator in SL, this one is really just a virtual acquaintance--think Facebook "friends." She dropped me a notecard in her instant message, and it is this that prompted this blog post. Perhaps it will help some of the 0 people (binary again) "get it."

Note that when Nymf says she read my "profile," that is simply one way to learn more about the people you meet in a virtual world. All it takes is a properly located right-click. Sometimes I wish real-life were so simple...

A picture of the Science Circle HQ (click to enlarge): 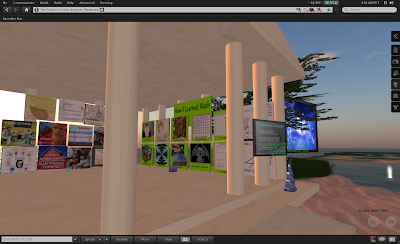 I would like to inform you about “Nymf’s Science Circle”.

The Circle is an alliance of RL Scientists from various fields who gather twice a month. At each meeting a member of the science circle, will give a presentation on a subject of the presenter's choice. We normally seek offers from members of the circle some weeks in advance.  Each presentation is followed by a Q&A and discussion session.  The discussions are  lively and informative, as our different perspectives inform the discussion. They are, however, also conducted with mutual respect and courtesy.

We aim to create the atmosphere of those fun,  free-wheeling seminars of our early careers.


Until now we have had a wide variety of topics and participation;
1. “The Anthropocene Epoch” by Vic Machalak

2. “The Chinese Room and Strong AI” by Boythorn Ironclad

3. “Religions and Rome” by Perfututor Janus

4. “Technology and Evolution” by Darkeagle Darkstone

6. "Perception and limits of reality" by Deepthinker Oh

12."Aspergers, Autism & the Rainman" by Deepthinker Oh and Arisia Vita

We run a website as well, for uploading the seminars in PDF, interviews with our  members, events, documentaries, weblinks, the Magazine "Gray Matters" and much more, have a look at    http://nymfs.mine.nu/

If you are a RL Scientist… consider joining the Circle!


We are hosted at Nature Publishing Group

If you aren't a scientist but would like to be kept informed about Circle-meetings... join Nymfs Forum. Go to Search, button Groups, Type; Nymfs Forum and join.


For information and memberships IM Nymf Hathaway or email chantal@xylan.nl

P.S. Whilst crafting this post, my avatar Scottmerrick Oh received yet another announcement from yet another group of science educators, announcing a community gathering happening in 15 minutes (from this writing). It's rich inworld, ya'll...


As summer drifts into autumn in the northern hemisphere, temperatures drop, and our thoughts turn to cryogenics.  Join us today at 10AM SLT to listen with us to the live BBC radio show, The Naked Scientists.  Bring your mittens and earmuffs.  SciLands (104,136,28)

Though all of Alfie Kohn's writings to date are well worth examining, and though he has contributed more logical and thoughtful arguments against homework, standardized testing, and the generally wrong-headed habits our schools have stacked one upon the other for generations--to the point that it seems overwhelmingly improbable they will ever be upended--his post yesterday in HuffPost Education, "Whoever Said There's No Such Thing As a Stupid Question Never Looked Carefully at a Standardized Test," is maybe the most concise and inarguable "elevator speech" on the topic to date, at least in the battle against the bane of progressive educational change, Standardized Testing.

As I read it, some concepts formed in my mind, chief among them the role that employment plays in all of this. Since I haven't really noticed much discussion of this element, I thought it right and good to toss it out there. It goes something like this:

Education is a thriving industry, and the more jobs that are mandated by the structures created to monitor it, even if the structures themselves are clearly offensive and ineffective, even harmful, the less likely we are ever going to see rational changes implemented. Yes, friends, it's that old love hate relationship, and its name is Capitalism. "It's the economy, dummy." Entrenched ways of doing things are self sustaining practices, and survival is keyed to self-preservation. In order to effect progressive change, we must negatively impact jobs.

Here are a couple questions I'd like to ask, in no particular order.

1) How many jobs are fueled by the commercial agencies that sell ACT and SAT prep? ACT and SAT delivery and evaluation? Other like entities for other standardized testing? See this list of Standardized Tests in the United States for a whiff of an answer. You don't even really need the number do you (though it would be interesting to ascertain)? Lots.

2) How many jobs are filled by those in and around the textbook industry (largely vestigial in the 21st century, though the industry does everything it can to deny that fact, for self-preservation, duh) whose INCREDIBLE prices are necessitated to support it? Well, hmmmmm, according to this blog (linger there a while), ~182,200,000 textbooks are sold every year and "between 1986 and 2004 textbook prices rose 186% in the US." How about college bookstores, around half of which are "private, for profit companies." Anybody look at textbook publisher CEO salaries lately?

3) Old models sustain employment by thousands, and changing them in any meaningful way stands to threaten jobs in major quantities. How that that ever be made right?

That's all I'm going to toss out this morning, but consider it tossed.

Have a wonderful weekend!
Scott