You Are Invited to Virtual Worlds

Feeling adventurous? Discover worlds of creativity, collaboration, and wonder by joining thousands of educators all across the globe who are exploring the values 3 dimensional "virtual worlds" can bring to learning and teaching. If you're feeling a little under the educational weather, this will help rejuvenate you, I can all but promise.-

I am working on a 3D Virtual World meeting and collaboration space for our school. Projected rollout of this powerful tool for use by our teachers and students is not until the 2012-13 school year, but you can learn more right now about 3D Virtual Worlds at a wiki I help maintain for the International Society for Technology in Education's Special Interest Group for Virtual Environments:http://sigve.iste.wikispaces.net . Spend a little time there then check out my Oh! Virtual Learning! blog.

When you feel like you want to actually explore virtual worlds for yourself, you can easily get yourself an avatar by clicking "Register" a thttp://reactiongrid.com and then downloading the Hippo viewer for your computer. Install that and fire it up using the avatar name and password you set up (and the settings information here) and go explore our 3D space in Reaction Grid (on the login screen, find "Places" and click that, then scroll down to MNPSVirtualLearning. Explore as much as you will and/or set up an appointment with me at the School or over Skype (my username is cleverly disguised: "scottmerrick") and we'll go in together. Tapping into my years of exploring the metaverse, I'll jumpstart you.


and here's a video so you can see a bit about how easy Jibe is to visit:


I submit this for your morning/afternoon/evening read:

Have we learned nothing? In 1994, The National Education Commission on Learning and Time published

To quote from its introduction:

"Learning in America is a prisoner of time. For the past 150 years, American public schools have held time constant and let learning vary. The rule, only rarely voiced, is simple: learn what you can in the time we make available. It should surprise no one that some bright, hard-working students do reasonably well. Everyone else-from the typical student to the dropout- runs into trouble.

Time is learning's warden. Our time-bound mentality has fooled us all into believing that schools can educate all of the people all of the time in a school year of 180 six-hour days. The consequence of our self-deception has been to ask the impossible of our students. We expect them to learn as much as their counterparts abroad in only half the time.

As Oliver Hazard Perry said in a famous dispatch from the War of 1812: "We have met the enemy and they are [h]ours."

If experience, research, and common sense teach nothing else, they confirm the truism that people learn at different rates, and in different ways with different subjects. But we have put the cart before the horse: our schools and the people involved with them-students, parents, teachers, administrators, and staff-are captives of clock and calendar. The boundaries of student growth are defined by schedules for bells, buses, and vacations instead of standards for students and learning."

On April 9th, a Poem


I was squeezing honey into my coffee from its honeybear this morning, counting "one-and-a-two-and-a-three-and-a" as the thin stream poured, a habit anytime I pour anything, established from five-plus years bartending for a living, decades ago. This caused me to reflect how any process, repeated enough (how many times did I tip up a pour-spout bottle and count in my head like that?), internalizes into subconscious habit. Mindfulness should be as lucky in my own internal habit mechanisms. Perhaps with a little more practice.

My brother died early this year, leaving my older brother and me as the remaining Merrick patriarchs, the last of our nuclear family, as it were. Ed texted me a week or so ago wondering if we should do something to honor Bill on his upcoming birthday. On Tuesday he would have been 59 years old. Alcohol, combined with some other habits of mind and body that he had allowed, perhaps encouraged, to gain control of his life, took him away in a last, violent, motorcycle moment. 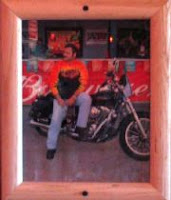 Maybe it's no coincidence: While cleaning out my home office recently I came across a thin three-ring binder of poems written during a semester of Vanderbilt University writing classes with Pulitzer Prize-winning poet-in-residence Philip Levine (he received the news of that award the evening before a class session). There are a few unpublished poems in binder, ones not in my little book of poetry that has languished at Lulu.com, a victim of my congenital lack of fiscal motivation, for years. If you want to take a look at that it's at http://lulu.com/scottmerrick. You can get a .pdf download for like a buck and a quarter.

That semester with Levine is a story unto itself, one which I may write someday, but not here.

One of those poems was written the week of April 9th, 1995, on the anniversary of our loss of our father, Edwin Augustus Merrick III, who had died in 1985. At the risk of being accused of double-dipping my grief, I submit it here to mark the passing of William Claude Merrick (November 22, 1952-January 20, 2011). I will note Levine's hand-written comment on the faded paper: "Don't abandon this -- much of the writing is potent; there is true candor here."

May Bill, my much missed little brother, rest in peace. And I mean it. As with all my poems, I feel it's best read aloud, if under your breath. Please accept...

The first year, on this day, my mood was maudlin.
Those who knew me knew the reason why:
Between me and the world there hung a coffin
suspended in the air. Although I'd try
to focus past it to the tasks at hand,
nothing I could do or say sufficed.
Later on, my anger at the man
and sorrow (over having lost him, twice)
as if bound by blood oath, would contrive
most painful ways to show the day was coming.
These past few years, the ache, alive,
less violent, has assumed a soft, incessant drumming.
Today I had not marked the day at all
until my hand picked up a telephone, to call.

This is a project I'm funding and supporting mostly with work done at home. I envision it to be a a fun gathering space/meeting space for our faculty and students as well as an enrichment option for our Computer Science learners. Feel free to visit--there's more there almost daily. If you have any suggestions for additions to the content, feel free to comment 'em here!