ISTE 2014 at ISTESIGVE in Second Life!

We're getting set up to share our portions of the ISTE 2014 experience in Atlanta, Georgia with educators around the globe at our ISTESIGVE headquarters in Second Life. Beginning Saturday, June 28, I'll be streaming SIGVE events into Second Life on the rooftop of our beautiful HQ building.

There's a notecard in the sign that details events, dates, and times proposed for streaming and this information will continue to grow as I plan the conference. I'm very excited this year because my only real presentation (that I'm time-committed to) is the SIGOL Ignite session, which should be cooler than grits and lasts only an hour. The rest of the time I'll be your cameraman on the scene, and I'll be in SL and in Atlanta and in the action's thick. Plan to plop down on a rooftop "comfy cushion" and join us! The Playground this year is organized and run by our own Bluebarker Lowtide and should be worth the cost of admission alone (if there were a cost of admission). See you there: Life(s) is good.
at March 30, 2014 No comments: Links to this post

I am lucky to live on the west side of Nashville, in a neighborhood where all the mostly ranch-style homes are backed by steep ridges that run like beef-steak marbling through the landscape. While the tops of the ridges closest to my home are technically not a part of the Conservancy proper (see the map at the Conservancy's website), they are attached to it by virtue of their undeveloped woodsiness and steep remoteness. My own property line contains a triangle of the woods, and just above it is a high ridge that if I follow it up to its highest point, connects to the "Ecological Corridor" protected not just by its elevation, but by law. If I could backpack in a boat to get me across the Cumberland River, I could hike to my favorite fishing lake, Marrowbone Lake, just northeast of Beaman Park, at the north end of the Corridor.


The other day, the last day of Winter, in order to get out of the house for a bit, I hiked up the back yard an onto "my" ridge. (Coming back down my neighbor caught a glimpse of me and phoned to make sure that it was me coming down "her" hill with a mandolin on my back.) I took a trash bag up, because I have for a while been bugged by the amount of beer cans and such up there. Here's the trash I collected, leaving "my" ridge now pristine and uncluttered by the man-made (unless you count the two deer hunter motion cams strapped to trees): 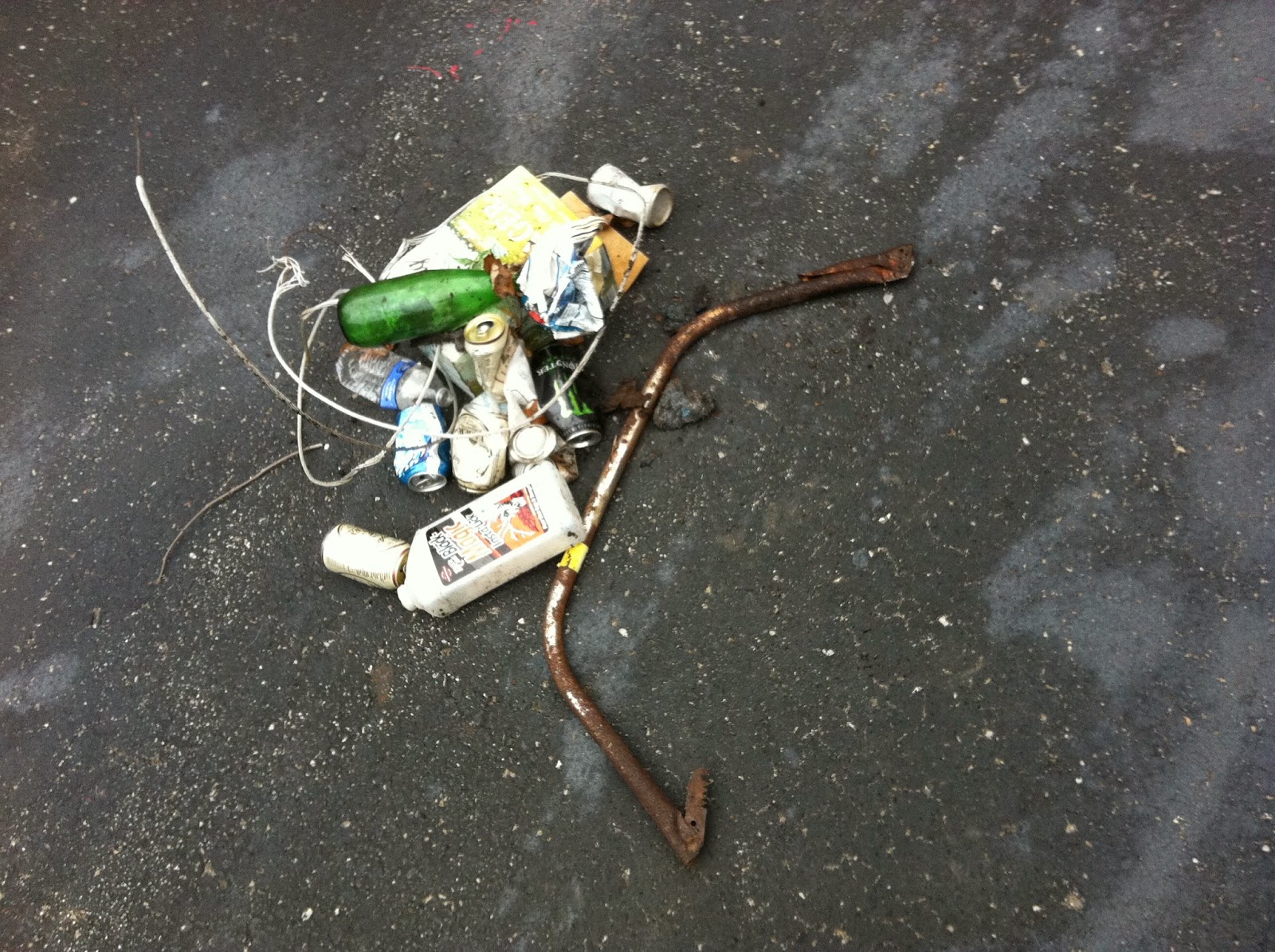 While I was up there, I headed over the overgrown jeep trail that leads up the top ridge north to intersect with the Conservancy and down into what I like to think of as "my" hollow, where there's a horizontal downed tree down into it a bit that serves as a perfect church pew for me to meditate and take in the relative silence. I have achieved such stillness there that I have been able to perceive the swaying of the trunks of trees 3 feet in diameter. But that day, I had packed in my mandolin, which as you will hear I don't play nearly enough these days (you can hear my licks from when I did play nearly enough on my Alaska band's live record at CDBaby. That said, I've long been experimenting with a single or double string technique with the open strings played to creating an often slightly discordant drone, and I ended up choosing a song I originally composed on a McNally Strumstick, "The Morning After," to record on my iPhone's QuickVoice app.

Walking back down toward home, I noted some natural compositions in the woods itself (there are many more), and I filmed a few of them and put together the following film. It's a little video poem. A videoem? Please enjoy:


I keep a Dropbox folder of pics I take when I walk, and you can check into it as you will at that folder's online location. Hopefully, I'll continue to explore and to note more fundamental natural relationships. I feel privileged to live in a city where some nature has been so thoughtfully protected, and I hope the deer, owls, and other critters who inhabit that Corridor and its abutting wild spaces do too.
at March 21, 2014 1 comment: Links to this post

Getty Images Goes all Social Media Friendly and Such

Very cool: Getty Images just implemented a decision to make its images watermark free and embeddable in exchange for a mandatory link to its site. This is a huge boon to bloggers, students, and teachers who are creating content. I'm just passing it along here, discovered this morning in Facebook shared by Wesley Fryer and Sharon Duffy Elts. they, in turn, got the skimmy on this sea change at The Verge. To find your own images by searching the Getty Images site, simply use the search tool and click on the open/close tags icon beneath your resulting picture. It looks like this:

.
Copy the code and make sure you are in your html edit mode. Paste it in, formatting as you wish -- I notice the image below, embedded in that way, has a scroll bar which I could noodle around with (likely the size parameters) to make disappear.  I'm thinking that the mandatory link is a citation in and of itself, voila! Auto-citation! At least in online documents. You may need to do an internet citation in a printed document, so be sure to check with your teacher(s) before thinking your academic integrity is in tact for a paper or project!

MNPS Initiates "PD of the Future" with MNPS All-Stars Training

Roughly 6,000 public school teachers will all be consistently exposed to a rigorous online self-paced course in Blackboard over the remainder of Spring semester and through the summer. In all schools in the district this week and ongoing, All-Star "Lead Learners" are introducing this program to their full-time certificated charges of 50 or fewer teachers along with the District expectation that they complete it by what I like to call "August the Oneth."

For the first time in my own 4 year employment with Metro, every single teacher will be on the same page with important concepts, policies, and resources--including Education 2018 (MNPS's plan "to become the highest performing school district in the nation by 2018"),  Common Core State Standards, PARCC testing, District hardware and software, Response to Instruction and Intervention, Teaching for Understanding, and what the district is calling it's "Lever of Change," Personalized Learning.

Ever since I heard David Warlick speak for the first time, likely around 1996 or 1997, I have been on board with the concepts underlying this change. I honestly never thought I would hear support for it coming from any administration. I couldn't even really get support for it in the private school sector. It seemed idealistic and revolutionary. Do you know why? it IThis, my friends, is huge.

I was lucky to have been chosen as one of those Lead Learners and to have undergone a two day training at Martin Professional Development Center last month. When I heard our Assistant Superintendent Jay Steele explain that he believed that there was still to be too much testing going on but "that's the world we live in," even that element glimmered with hope for the future. All through the training, my dear friend Dr. Kecia Ray, Executive Director of Learning Technology and current President of ISTE, and others reminded us that we were blazing new trails and emphasized that any new ideas we had for improvement would be heard and acted upon if deemed appropriate. Again, this is a public school district, the largest in the state, serving well over 80,000 students in an amazingly culturally diverse county, with demographic and socio-economic statistics that should scare anyone attempting to do the right thing by all its constituents. I'll throw one at you: "72% Economically Disadvantaged." You can see them all here.

Expect to hear more about this. We are on the move. I'm proud to be a small part of it.
at March 03, 2014 No comments: Links to this post