It Could Be "You"

I'm so buzzed. I laid out my traveling clothes today so Lee Ann can pare them down tonight for packing. I'm getting in Thursday to Denver, Colorado to spend two weeks at my dear sis- and bro-in-law's beautiful home by Observatory Park, and the first week will be spent with my international peeps, old and young, old and new, innovators and thought leaders one and all. My biggest contribution to this year's ISTE2016 program is one built collaboratively by many people. I am absolutely certain it will be the best Playground ever, and we've been doing these for quite a few years. They've all been good, but this one looks...different. See what I mean here (note--all times are local to Denver, MDT): 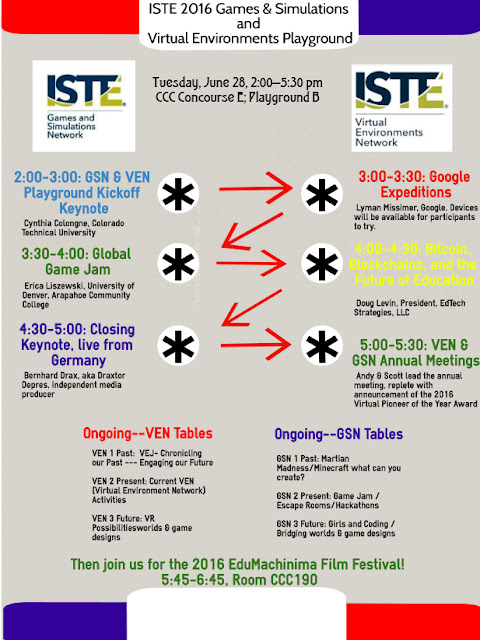 More details are available at the session's online document at http://bit.ly/GS-VENpg16. Go see what I mean. Meanwhile, if you are there, find me. If you are not there, visit http://tinyurl.com/isteven in Second Life and at any given time we will be meeting in there as well. Finally, watch for 'Scopes at http://periscope.com/scottmerrick or just @scottmerrick on Periscope.

I'll also be helping out with the Online Learning Network's "Speed Dating, Falling in Love with Online and Blended Learning" event on Monday at 12:45-1:45 in CCC 405. That'll be a blast for sure! Michele Eaton, Doug Renfro, Nathan White and I are going to load your brain up with dynamic and empowering testimony from leaders in the field. Join us for that as well!!! 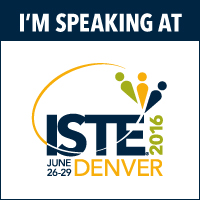 Haiku from a Virtual World

Come join the ISTE VEN Writers Group in Second Life every first Tuesday of every month as we visit immersive simulated environments to inspire writing in any genre. Here's a little haiku I set down after our very first outing in April. The group is growing and the work is happening. Very fun, very worthy of one's time and attention.


Visit http://bit.ly/istevenetwork on Tuesdays at 5pm SLT (Pacific Time) to join in on all our activities and learning opportunities.

See you at ISTE2015 in Denver, CO and in the Metaverse!

So it's the wee hours of the morning and dawn sunlight is peeking through the blinds in our NNW-facing home. The livestock are calm, Watson up on the leather sectional and MacGuyver curled up on the rug beneath, and senile Ruby on her carefully folded towel in the platform of her cat-condo. She's incontinent and we're making her comfortable in her dotage and limiting the daily clean-ups to the floor of her toney cat cage and litter box, which she misses with consistency.

I'm thinking about the election, and I'm thinking about what's right and what's wrong. I'm not really going to enumerate the issues here because you're hearing it, seeing it, and reading it everywhere you turn these days. But I do want to muse a bit.

With Hillary, who has been successfully demonized by well-meaning (and, yes, often self-rightous) Bernie  supporters, it would seem that the throngs of BernieorBust and NeverHillary folks are settled in against her. If you've spent time in that camp, as have I, you've seen enough to convince you that she has profited enormously from her position(s) in life and that anything she says about income inequality or oppression is at best second-hand and at worst, political pandering. She supported Goldwater, for God's sake. She's jingoist and hawkish and has been knee-jerk Military Industrial Complex candy. She's married to a man I once respected, but this primary campaign has lost that to him. Was his unraveling of Dodd-Frank Consumer Protection legislation a simple mistake? No, it was a complex one, and his teflon-like avoidance of consequences for this and for his personal behavioral choices is uncanny. He has lied straight faced to us, apologized for it, and then he slid into his incredibly lucrative foundation work like none of it ever happened.

It's a sad and scary day when anything The Donald says scans like the truth to me, but some of  Drumpf's criticisms of the Clintons approach that, e.g. this from politico.com, "The Clintons have turned the politics of personal enrichment into an art form for themselves," Trump said during his remarks Tuesday evening. "They've made hundreds of millions of dollars selling access, selling favors, selling government contracts, and I mean hundreds of millions of dollars."

They "turned the State Department into her private hedge fund. The Russians, the Saudis, the Chinese all gave money to Bill and Hillary and got favorable treatment in return. It's a sad day in America when foreign governments with deep pockets have more influence in our own country than our great citizens."

The generous (and possibly naive) part of me wants to hope that no matter how despicable Hillary's actions have been in the past, this campaign has made her a better person. Once in office her charge will be to make good on her recently refined declarations of intent. Bernie has brought out the progressive in her. Can she follow up for positive change? Well, if she is as persistent in that as she has been so, historically, in her self-promotion and self-enriching efforts, the answer would be yes. 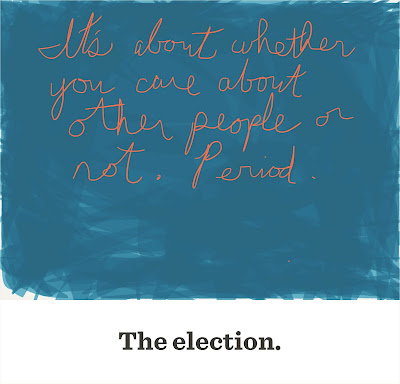 Here's what she should do if she wants my vote:
The Bottom Line:
I'm on the fence about whether voting for a third party candidate who is honest, capable, and dedicated to reclaiming democracy from oligarchy would be tossing the POTUS throne to The Donald or if it could actually happen that Bernie Sanders might sweep into office on the votes of young people and us older adults who still care about fairness and equality. Given what seem to be rampant irregularities in primary voting systems this year, I am leaning toward the former. On the surface, it appears that Bernie supporters would rather rally than vote. Is that true? Or are his losses mostly the result of a broad voter suppression strategy on the part of the DNC and Hillary? That's the stickler, and I am withholding my decision, most likely, until I press the button in the voting booth.
Of course, with substantial legal challenges facing both presumptive (and presumptuous) candidates of our broken two-party system, things may change completely by November and one or both of them may be in jail.
And that's that with that. For now.