AmericanaFest2019 through mine eyes

Mine eyes have seen the glory...

I had an absolute BLAST going out to hear live performances of music all week, thanks to AmericanaFest2019. Initially, my lovely person was planning to take a highly unusual week off from her fantastic business, Tinwings, to go stay at a beach home in Pawley's Island with a dear friend. I discovered Americana Fest and thought, well, okay, I'll go hear some music while she's gone. The week changed due to her friend's schedule and I was about to bail, but Lee Ann told me, hey, do it anyway. So I did!

I sprung the 90+ dollars for a wristband that would get me into any of the shows at any of the venues I chose to attend Tuesday, September 10 through today, Sunday the 15th. It was fun to hear moving lyrics sung by brilliant songwriter/performers every night at many Nashville locations, some of which I'd never attended. See the list of performers in this graphic: 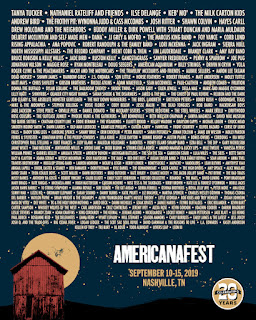 And take a few miniutes to run through my album of snapshots and video snippets at Google Photos.

What was my favorite part? Wow. That's a tough one. I would say it's that I got myself out, met some nice humans, and formed some new fan relationships with a double handful of talented people some of whom I'd never heard of! I saw some acquaintances perform, including another former student from my first 3rd grade class in 1996-7. You may recall my good fortune to meet up with Lizzy Plotkin at the end of last May.

I thoroughly enjoyed Shawn Colvin's work as she performed her breakthrough record "Steady On" from top to bottom, just her and her acoustic guitar. And to witness Mark Erelli's award-nominated "By Degrees" sung by him the same way at a venue new to me, The Anchor, was unforgettable.

This time it was the incredibly talented Forrest O'Conner I got to see perform at One in Cannery Row performing an intimate set with Kate Lee and others. 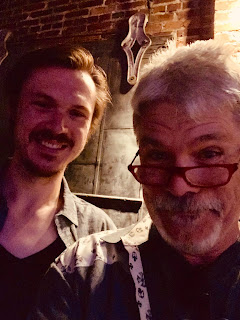 It was a fun week and I'll be back next year, "believe it to me."

Just listened to this little piece I put together last Lee Ann's birthday. The refrain is the title of her mythological memoir, which sh...